The Contemporáneos group : rewriting Mexico in the thirties and forties 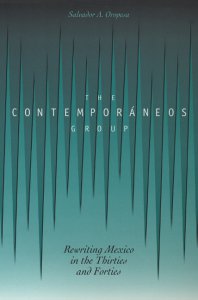 In the years following the Mexican Revolution, a nationalist and masculinist image of Mexico emerged through the novels of the Revolution, the murals of Diego Rivera, and the movies of Golden Age cinema. Challenging this image were the Contemporáneos, a group of writers whose status as outsiders (sophisticated urbanites, gay men, women) gave them not just a different perspective, but a different gaze, a new way of viewing the diverse Mexicos that exist within Mexican society. In this book, Salvador Oropesa offers original readings of the works of five Contemporáneos—Salvador Novo, Xavier Villaurrutia, Agustín Lazo, Guadalupe Marín, and Jorge Cuesta—and their efforts to create a Mexican literature that was international, attuned to the realities of modern Mexico, and flexible enough to speak to the masses as well as the elites.

Oropesa discusses Novo and Villaurrutia in relation to neo-baroque literature and satiric poetry, showing how these inherently subversive genres provided the means of expressing difference and otherness that they needed as gay men. He explores the theatrical works of Lazo, Villaurrutia's partner, who offered new representations of the closet and of Mexican history from an emerging middle-class viewpoint. Oropesa also looks at women's participation in the Contemporáneos through Guadalupe Marín, the sometime wife of Diego Rivera and Jorge Cuesta, whose novels present women's struggles to have a view and a voice of their own. He concludes the book with Novo's self-transformation from intellectual into celebrity, which fulfilled the Contemporáneos' desire to merge high and popular culture and create a space where those on the margins could move to the center.