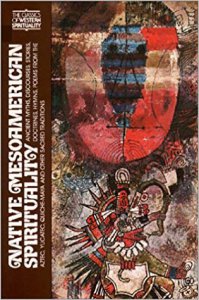 "For sheer publishing courage and imagination, what can surpass...The Classics of Western Spirituality?" Publishers Weekly

"...of fundamental  importance to amy student or scholar interested in the development and dimensions of the religious ideas and experiences of man." Mircea Eliade.

How has your heart decided

I am at your side, you are God

This volume presents a carefully edited and translated collection of Pre-Columbian ancient spitirual texts. It presents relevant examples of those sacred writings of the indigenous peoples of Central America, especially Mexico, that have survived destruction. The majority of texts were conceived in the 950-1521 A.D. period. Their authors were primarily anonymous sages, priests and members of the ancient nobility. Most were written in Nahuatl (also known as Aztec or Mexican), in Yucatec and Quiche-Maya languages. This volume has been edited by Miguel León-Portilla of the Institute of HistoricalResearch at the National University of Mexico. Dr. León-Portilla in his introduction says: "These Native American Classics of Spirituality when properly dealt with are no longer to be regarded as alien in the sense that there cannot exist a consubstantial bridge between them and the spiritual masters of the West...A realm of unsuspected wisdom will then begin to manifest itself."

Fernando Horcasitas in his fine Preface calls on the reader to become "captured by the beauty of the lines" and to leave his mind "less cluttered with stereotypes" of the native American. He suggests opening the book at random to fing "verses here and there, composed in the night, in the wind, that will bring ease to his heart as he walks between the abyss on one side and the ravine on the other. And those who are weary of all the conflicting elements in our present realities, who long to shatter "this sorry state of things entire," will find heart if they can get a glimmering—even though it be faint—of the jade and turquoise the Indian poet sought and found in his songs."