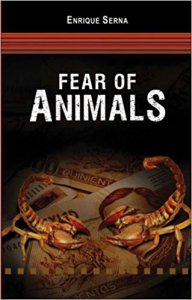 Former crime reporter Evaristo Reyes trades his burning desire to publish for a life of action in Mexico’s notorious judicial police, but easy money and the squalid perks of his thuggish new career soon compromise his dreams of penning the definitive inside story.
When his brutish boss orders him to kill a critic who has insulted the President, he identifies with the scribe and then finds incriminated for a murder he has failed to commit. Evaristo’s efforts to find the killer cut him adrift in an intellectual swamp inhabited by the country’s carnivorous cultural elite.
Fear of animals is an eye-opening safari into the vicious fauna of Mexico’s literati, a pampered elite characterized by rivalry, complicity and hypocrisy. It is a raw satire so deliriously corrosive that it pays no respect to auras of sanctity, and generated acidic resentment within the country’s cultural aristocracy.