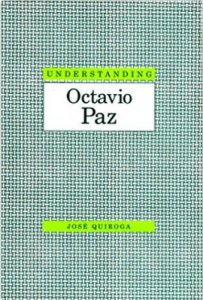 In this comprehensive examination of the work of one of the major poets of this century —winner of the 1990 Nobel prize for Literature and undoubtedly Mexico's most important literary figure— José Quiroga presents a timely analysis of Octavio Paz's writing in light of recent works by and about him,. Combining broad erudition with scholarly attention to detail, Quiroga views Paz's work as an open narrative that explores the relationships among the poet, his readers, and his time.

Understanding Octavio Paz provides thorough readings of Paz's poetry, essays, and autobiographical works within their historical, political, and aesthetic contexts. Quiroga begins his analysis by setting out the broad outlines of Paz's life, which he examines in greater detail through the book. Scrutinizing Paz's most important collection of poetry, Libertad bajo palabra, Quiroga takes into account the series of revisions to which Paz has submitted his poetic works. In readings regarding society and politics, he focuses on The labyrinth of Solitude, which has grown to include Paz's most recent observations on Mexico and the Mexican State. Quiroga also examines Paz's works published before and after the poet's stay in india during the 1960s; and Paz's longer poems written in the 1970s and 1980s.

From aesthetics to politics, from art to society, from art criticism to anthropology, Paz continually rereads himself. Understanding Octavio Paz gives an account of his major presence in world poetry.