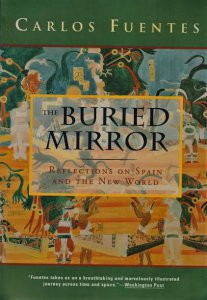 Now in paperback, the best-selling and lavishly illustrated history of the cultures of Spain by renowned novelist Carlos Fuentes. Set in the context of Spain's own multicultural roots. The buried Mirror is a unique history of the socil, political, and economic forces that have created the remarkable culture that stretches from the mysterious cave drawings at Altamira to the explosive graffiti on the walls of East Los Angeles.The buried mirror"Fuentes has written what may be the freshest and most inspiring quincentenial history. He achieves this by bringing into sharp focus the fiction writer's obsession with the soul - in this case, the Hispanic soul. His style is clear, intellectually charged, and powerfully argued, invigorated by the novelist's sense of irony, paradox, and sensuality."

The buried mirror"A bittersweet celebration of the hybrid culture of Spain in the New World... Drawing expertly on five centuries of the cultural history of Europe and the Americas, Fuentes seeks to capture the spirit of the new, vibrant, and enduring civilization that began in Spain"

"With his considerable gifts as a narrator, Fuentes captures much of the sweep and drama of Hispanic history... As narrative and commentary it is forceful and beautifully written."

Carlos Fuentes is the author of more than a dozen novels, including Terra Nostra ,The Old Gringo, Christopher Unborn, and, most recently, The Campaign, as well as numerous short stories, plays, literary and political essays, and articles. Fuentes is the host of the fives-part television series The buried Mirror.