The learned ones : Nahua intellectuals in postconquest Mexico 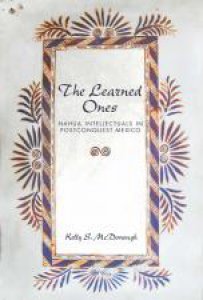 "They were the healers, teachers, and writers, the "wise ones" of Nahuatl-speaking cultures in Mexico, remembered in painted codices and early colonial manuscripts of Mesoamerica as the guardians of knowledge. Yet they very often seem bound to an unrecoverable past, as stereotypes prevent some from linking the words "indigenous" and "intellectual" together. Not so, according to author Kelly S. McDonough, at least not for native speakers of Nahuatl, one of the most widely spoken and best-documented indigenous languages of the Americas. This book focuses on how Nahuas have been deeply engaged with the written word ever since the introduction of the Roman alphabet in the early sixteenth century. Dipping into distinct time periods of the past five hundred years, this broad perspective allows McDonough to show the heterogeneity of Nahua knowledge and writing as Nahuas took up the pen as agents of their own discourses and agendas. McDonough worked collaboratively with contemporary Nahua researchers and students, reconnecting the theorization of a population with the population itself. The Learned Ones describes the experience of reading historic text with native speakers today, some encountering Nahua intellectuals and their writing for the very first time. It intertwines the written word with oral traditions and embodied knowledge, aiming to retie the strand of alphabetic writing to the dynamic trajectory of Nahua intellectual work"-- Provided by publisher.
""In The Learned Ones, Kelly S. McDonough gives sustained attention to the complex nature of Nahua intellectualism and writing from the colonial period through the present day. This collaborative ethnography shows the heterogeneity of Nahua knowledge and writing, as well as indigenous experiences in Mexico"--Provided by publisher"-- Provided by publisher.
* Esta contraportada corresponde a la edición de 2014. La Enciclopedia de la literatura en México no se hace responsable de los contenidos y puntos de vista vertidos en ella.