The Man Who Wrote Pancho Villa : Martín Luis Guzmán and the Politics of Life Writing 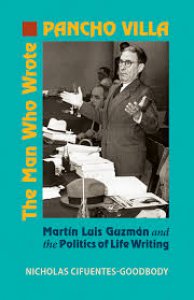 Martin Luis Guzman was many things throughout his career in twentieth-century Mexico: a soldier in Pancho Villa's revolutionary army, a journalist-in-exile, one of the most esteemed novelists and scholars of the revolutionary era, and an elder statesman and politician. In The Man Who Wrote Pancho Villa, we see the famous author as he really was: a careful craftsman of his own image and legacy. His five-volume biography of Villa propelled him to the heights of Mexican cultural life, and thus began his true life's work. Nicholas Cifuentes-Goodbody shapes this study of Guzman through the lens of "life writing" and uncovers a tireless effort by Guzman to shape his public image.

The Man Who Wrote Pancho Villa places Guzman's work in a biographical context, shedding light on the immediate motivations behind his writing in a given moment and the subsequent ways in which he rewrote or repackaged the material. Despite his efforts to establish a definitive reading of his life and literature, Guzman was unable to control that interpretation as audiences became less tolerant of the glaring omissions in his self-portrait.
* Esta contraportada corresponde a la edición de 2016. La Enciclopedia de la literatura en México no se hace responsable de los contenidos y puntos de vista vertidos en ella.