Errors and Reconciliations : Marriage in the Plays and Novels of Henry Fielding 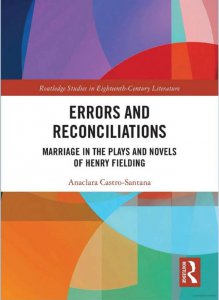 Henry Fielding is most well-known for his monumental novel Tom Jones. Though not necessarily common knowledge, Henry Fielding started his literary career as a dramatist and eventually transitioned to writing novels. Though vastly different in their approach and subject, there is a common thread in Fielding’s work that spanned his career: marriage. Errors and Reconciliations: Marriage in the Plays and Novels of Henry Fielding explores this theme, focusing on Fielding’s fascination with matrimony and the ever-present paradoxical nature of marriage in the first half of the eighteenth-century, as a state easily attained but nearly impossible to escape.