Aztlán: Essays on the Chicano Homeland, Revised and Expanded Edition 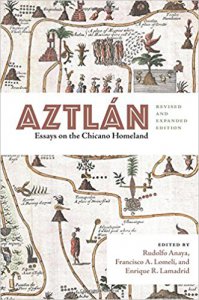 "After close to half a century of elaboration on the concept and cultural forces of Aztlán with this edition, we encounter new sets of thinking  and radical perspectives, and most of all, perhaps, we can see otherselves in the universe as never before—turning repivoting a new poetic mind, a fuller humanity. These authors are brillant, daring pioneers. Bravo!"

"A landmark anthology that provides a broader perspective of Aztlán in the imagination and in the reality af the twenty-first century."

"This book combines interperspective understandings of the concept of Aztlán as an inspirational rallyng cry for Chicanas and Chicanos in the twentieth century with new critical and theoretical insights on its use and value in thenty-first century."

—IRENE VÁSQUEZ, coauthor of Making Aztlán: Ideology and Culture of the Chicana and Chicano Movement, 1966-1977

DURING THE 1960s and 1970s, the myth of Aztlán, homeland of the ancient Aztecs, served as a unifying force in an emerging Chicano cultural renaissance. Aztlán continues to resonate as deply in the Chicano imagination as it did in post-Conquest Mexico, when it motivated thousands of Mexican Indians to come north with expeditions of exploration an colonization. The return of the place of origin is a return to the future, a spiritual cartography of hope. This expanded edition of the classic 1989 Aztlán anthology adds a new collection of maps and codices, plus six more essays, including both the oldest  and mos recent written on the subject.

RUDOLFO ANAYA is the widely acclaimed author of the best-selling, groundbreaking Chicano novel Bless Me, Ultima and many other books and essays.

FRANCISCO A. LOMELÍ is a senior scholar of Chicana/o and Latin American literature at the University of California. Santa Barbara, and member of the North American Academy of Spanish Language.

ENRIQUE R. LAMADRID, renowned folklorist and cultural historian, is a Distiguished Professor Emeritus of Spanish at the University of New Mexico.