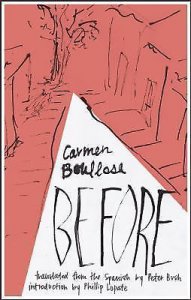 A profound and moving coming-of-age novel that explores the end of one woman´s innocence in childhood.

Originally published in 1989 as renowned poet Carmen Boullosa´s second novel -though it was the first she ever wrote- Before tells the story a woman who returns to the landscape of her childhood to rebulld her past and regain her innocence, knowing that in order for her to discover her lost identity, she must overcome the fear that held her captive as a little girl.

Part ghost story, part bildungsroman, Before is a moving exploration of the path to womanhood and innocence lost that won Boillosa the Xavier Villaurrutia Prize, Mexico´s most prestigious literary award, marking the arrival of a brave and unique new literary voice in Mexican literature who has gone on to dazzle the world with her inventive and profound storytelling in bestselling, award-winning novels such as Texas: The Great Theft, Heavens on Earth, and Cleopatra Dismounts.