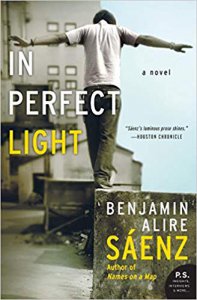 In Perfect Light is the story of two very strong-willed people, forever altered by a single tragedy, and their improbable ascent out od farkness.

After young Andrés Segovia´s parents die, his brother steals the family away to Mexico to avoid a painful separation. The decision, made with the best intentions, sets into motion the unraveling of an American family. Years later, unequipped to make sense of his life, Andrés collapses under the weight of an emotional burden too frightening and maddening to bear alone. The manifestation of this is a singular rage that finds outlet in a dark and seedy bar, which leads him improbably to Grace.

Grace is a therapist recently confronted with her own mortality. At first they encounter each other with closed hearts, but then they begin to find transformative peace in their exchanges. With Grace's help, Andrés begins to face his pain—even as secrets surrounding the death of his parents threaten to strain their connection irreparably.