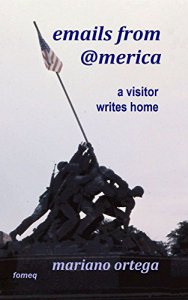 emails from @merica is a book that looks at some aspects of our normal, taken-for- granted social surroundings and everyday life –which for us are an automatic, unconscious, and unquestioned part and parcel of our country and our daily routines– with different, pristine –if admiring– alien eyes.

In a discovery tour, a fictional foreign national visits some of the United States’ most emblematic cities, like New York, Boston, Philadelphia, San Francisco, and New Orleans, with the clear aim of learning as much as possible about the USA, its customs and its mores –a country the writer considers the epitome of an exemplary first-world country.

The result is this insightful and eye-opening book –a collection of the emails he writes home, reporting his observations and experiences; giving the reader the chance of rethinking topics like education, justice, politics, race, gender, freedom, equality, immigration, and the law, from a fresh and incisive perspective.

Mariano Ortega, an Organizational Consultant, has taught at different universities in both Mexico and the US.