Toward a latina feminism of the americas : repression and resistance in chicana and mexicana literature 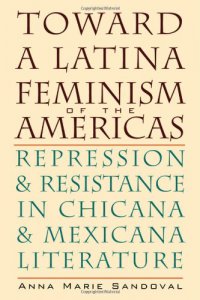 Weaving strand of Chicana and Mexicana subjectivities, "Toward a Latina Feminism of the Americas" explores political and theoretical agendas, particularly those that undermine the patriarchy, across a diverse rage of Latina authors. Within this range, calls for a coalition are clear, but questions surrounding the process of these revolutionary dialogues provide important lines of inquiry. Examining works of the authors such as Sandra Cisneros, Laura Esquivel, Carmen Boullosa, and Helena Marie Viramontes, Anna Sandoval considers resistance to traditional cultural symbols and contemporary efforts to counteract negative representations of womanhood in literature and society. Oferring a new perspective on the oppositional nature of Latina writers, Sandoval emphasizes the ways in wich national literature have privileges male authors, whose viewpoint is generally distinct from that of women. Building on the literary production, Sandoval interrogates the boundries of the dialogues begun with such works as Sania Saldivasr-Hull's "Femiism on the Border" and Ellen McCracken's "New Latina Narrative", this is a concise yet ambitious comparative approach to the historical and cultural connections (as well as disparities) found in Chicana and Mexicana literature.