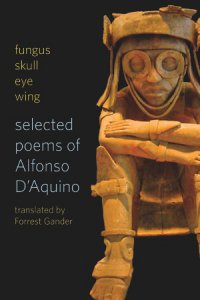 “This is the first bilingual collection by the Mexican master of nature poems, D’Aquino…A necessary read for fans of Hart Crane, Jack Spicer, and Latin American poetry in translation.”—Booklist

"Alfonso D'Aquino was raised by his grandmother in an old house attached to a colonial convent in Coyoacán, Mexico. Books were his best friends from an early age. Often solitary, he spent many afternoons at a small aquarium in the nearby town of San Ángel, fascinated then as now by the non-human."—Forrest Gander, from the introduction

fungus skull eye wing is a book of shifting subjectivity and liquid perspective, of surrealist tradition and Butoh-like gestures. The text flirts with the margins of the "rational," perception, and the subjective mind. The speaker morphs into what he observes; speech comes alive while a plant becomes speech. Impeccably translated from Spanish by award-winning poet Forrest Gander in a bilingual edition.

From "Its Verb's Forked Tongue":

Alfonso D'Aquino is an editor, poetry instructor, snake handler, and author of six books. He was born in Mexico City in 1959 and currently lives in Cuernavaca, Mexico. His poetry is included in the landmark anthology Reversible Monuments: Contemporary Mexican Poetry.

Forrest Gander is a poet, translator, and professor at Brown University. His books have been named finalists for the Pulitzer Prize and the National Book Critics Circle Award.