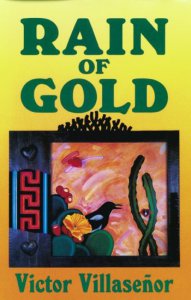 Rain of Gold is a true-life saga of love, family and destiny, pulsing with bold vitality, sweeping from the war-ravaged Mexican mountains of Pancho Villa’s revolution to the days of Prohibition in California.

It all began when the author’s maternal grandmother sat him down in their little home in the barrio of Carlsbad, California, and gave him sweet bread and told him the story of their past. Of his mother Lupe, the most beautiful girl in the whole village, no more than a child when Villa’s men came shooting into their canyon. And of his father Juan and his family, reduced to rags and starvation by the Revolution as they ran a tireless race against extinction to escape across the border into the United States, where they believed that endless opportunity awaited them.

But Juan found that the doors to the promised land are often closed to those from south of the border. There were times when a man had to take the law into his own hands. But Lupe, law-abiding and extremely religious, learned early in her war-plagued life that love was more powerful than violence, and she refused to bend. It became a struggle of iron wills and deepest passion, a story of love told with humor and poetry that celebrates the triumph of the human spirit.