Juan and the jackalope : a children's book in verse 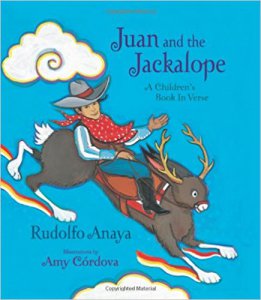 When Rosita, the loveliest gal in the Pecos River Valley, offers her delicious rhubarb pie as first prize for the Great Grasshopper Race, a thousand love-struck vaqueros line up for the competition. Of course everyone believes that the legendary cowboy Pecos Bill, riding his giant grasshopper, Hoppy, is a shoo-in for the grand prize. Sure enough, Bill and Hoppy give an impressive performance, crisscrossing the Southwest in a raucous ride. But young Juan, who is hopelessly in love with Rosita, astonishes them all when he and Jack the Jackalope take a miraculous ride around the world and across the Milky Way. The daring pair return, covered in stardust, to claim the beautiful Rosita and her delicious pie. Set in New Mexico, Anaya's fanciful story, coupled with Amy Córdova's vivid illustrations, brings the tradition of Southwestern tall tales to a new generation of young readers.

Rudolfo Anaya has received numerous awards, including the Premio Quinto Sol for his nove Bless Me, Ultima, the national Chicano literary award, the National Medal of Artsfol literature, the PEN Center West Award for Fiction, the American Book Award from The Before Columbus Foundation, the Mexican Medal of Friendship from the Mexican Consulate, and the Western Literature Association's stories include The First Tortilla: A Bilingual Story and The Santero Miracle: Bilingual Story, also ilustrated by Amy Cordova (both UNMP). Amy Cordova lives in Taos, New Mexico, where she is an educator and is the illustrator for Juan the Bear and the Water of Life: La Acequia de Juan del Oso (UNMP).