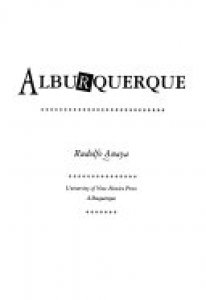 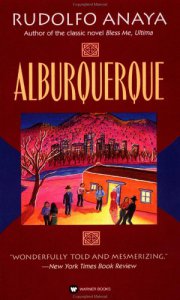 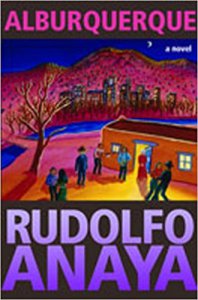 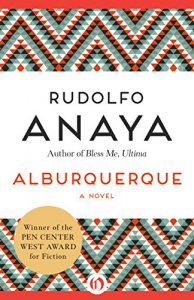 "In April of 1880 the railroad reached la villa de Alburquerque in New Mexico. Legend says the Anglo stationmaster couldn't pronounce the first 'r' in 'Albur' so he dropped it as he painted the station sigh for the city..."

Nobody knows the real "Alburquerque" like young boxer, Abrán Gonzalez. A shomeboy from the barrio, he feels his world shatter the night he is summoned for the deadthbed of his biological mother, a woman he has never known. It is the that he learns that he is the son of a wealthy Anglo woman and unknown Mexican man—a father whose identity he feels compalled to find. This passionate quest wil lead him into Albuquerque's highest—and whitest—circles. Confronting greedy bisinessmen, driven politicians, and bitter bigots, Abrán will battle for the city's future, gain insight into its vanishing past...and discover his own soul.

Lauded as the father of Chicano storytelling in English, Rudolfo Anaya's work is famed for its cultural resonance and unforgettable characters. Alburquerque introduces his richest theme yet, and his most stirring hero.

"OUR POET OF THE LLANO AND THE BARRIO IS BACK AND AT THE TOP OF HID FORM."—Tony Hillerman

WINNER OF THE PEN CENTER WEST  AWARD FOR FICTION