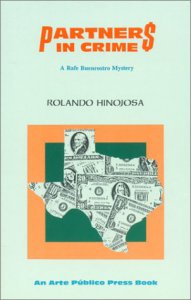 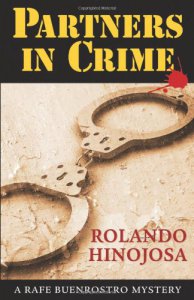 It's October 1972, and the Belken County Homicide Squad is dealing with a dead body found in a cotton field. Lieutenant Detective Rafe Buenrostro and the other men are accustomed to corpses, even though they live in rural South Texas along the Mexican border.

The bloody scene at the Kum Bak Inn is a different story, though: three men are slaughtered brutally. Two witnesses spared this horrific death are able to provide first-hand descriptions of the killers: three Mexican nationals, armed with machine guns, driving an Oldsmobile.

These clues send Rafe and his colleagues down a twisting path strewn with leads. But it's a meeting with their Mexican counterpart which sets them on the trail that will lead them to the killers.

Foreshadowing the violence plaguing the border area, Rolando Hinojosa's first mystery novel was originally published in 1985 and has been out of print for years. Partners in Crime is a procedural whodunit that will satisfy the most hardened mystery aficionado.