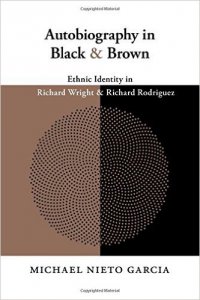 Richard Wright was the grandson of slaves, Richard Rodriguez the son of immigrants. One black, the other brown, each author prominently displays his race in the title of his autobiography: Black Boy and Brown. Wright was a radical left winger, while Rodriguez is widely viewed as a reactionary. Despite their differences, Michael Nieto Garcia points out, the two share a preoccupation with issues of agency, class struggle, ethnic identity, the search for community, and the quest for social justice. Garcia’s study, the first to compare these two widely read writers, argues that ethnic autobiography reflects the complexity of ethnic identity, revealing a narrative self that is bound to a visible ethnicity yet is also protean and free.

These autobiographies, according to Garcia, exemplify the tensions and contradictions inherent in identity. In their presentation of the self we see the rejection not only of essentialized notions of ethnic authenticity but also of any conception of an ethnic self that is not also communally derived. The image reflected in the mirror of autobiography also reminds us that consciousness itself is altered by our reading, and that the construction of modern ethnicity is shaped to a considerable extent by print culture.
* Esta contraportada corresponde a la edición de 2016. La Enciclopedia de la literatura en México no se hace responsable de los contenidos y puntos de vista vertidos en ella.