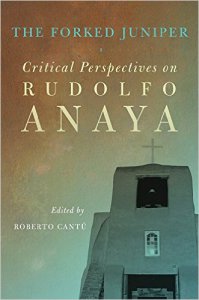 Widely acclaimed as the founder of Chicano literature, Rudolfo Anaya is one of America’s most compelling and prolific authors. Best known for his debut novel, Bless Me, Ultima, his writings span multiple genres, from novels and essays to plays, poems, and children’s stories. Despite his prominence, critical studies of Anaya’s writings have appeared almost solely in journals, and the last book-length collection of essays on his work is now more than twenty-five years old. The Forked Juniper remedies this gap by offering new critical evaluations of Anaya’s ever-evolving artistry.

Edited by distinguished Chicano studies scholar Roberto Cantú, The Forked Juniper presents thirteen essays written by U.S., Mexican, and German critics and academics. The essayists employ a range of critical methods in their analyses of such major works as Bless Me, Ultima (1972), Jalamanta: A Message from the Desert (1996), and the Sonny Baca narrative quartet (1995–2005). Through the lens of cultural studies, the essayists also discuss intriguing themes in Anaya’s writings, such as witchcraft in colonial New Mexico, the reconceptualization of Aztlán, and the aesthetics of the New World Baroque. The volume concludes with an interview with renowned filmmaker David Ellis, who produced the 2004 film Rudolfo Anaya: The Magic of Words.

The symbol of the forked juniper tree—venerated as an emblem of healing and peace in some spiritual traditions and a compelling image in Bless Me, Ultima—is open to multiple interpretations. It echoes the manifold meanings the contributors to this volume reveal in Anaya’s boundlessly imaginative literature.

The Forked Juniper illuminates both the artistry of Anaya’s writings and the culture, history, and diverse religious traditions of his beloved Nuevo Mexico. It is an essential reference for any reader seeking greater understanding of Anaya’s world-embracing work.