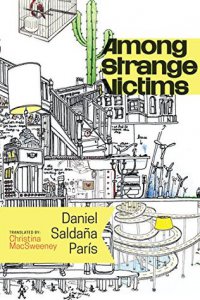 "Brief, brilliantly written, and kissed by a sense of the absurd....like a much lazier, Mexico City version of Dostoevsky's Underground Man."
John Powers, Fresh Air

“Daniel Saldaña París knows how to talk about those other tragedies populating daily life: a boring, unwanted marriage; mind numbing office work; family secrets. He builds on those bricks of tedium a greatly enjoyable and splendidly well-written suburban farce.”

Rodrigo likes his vacant lot, its resident chicken, and being left alone. But when passivity finds him accidentally married to Cecilia, he trades Mexico City for the sun-bleached desolation of his hometown and domestic life with Cecilia for the debauched company of a poet, a philosopher, and Micaela, whose allure includes the promise of time travel. Earthy, playful, and sly, Among Strange Victims is a psychedelic ode to the pleasures of not measuring up.

Daniel Saldaña París (born Mexico City, 1984) is an essayist, poet, and novelist whose work has been translated into English, French, and Swedish and anthologized, most recently in México20: New Voices, Old Traditions, published in the United Kingdom by Pushkin Press. Among Strange Victims is his first novel to appear in the United States. He lives in Montreal, Quebec.