The Writings of Carlos Fuentes 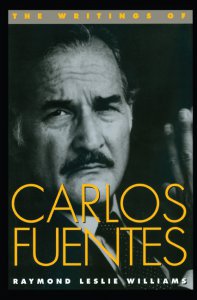 Smitten by the modernity of Cervantes and Borges at an early age, Carlos Fuentes has written extensively on the cultures of the Americas and elsewhere. His work includes over a dozen novels, among them The Death of Artemio Cruz, Christopher Unborn, The Old Gringo, and Terra Nostra, several volumes of short stories, numerous essays on literary, cultural, and political topics, and some theater.

In this book, Raymond Leslie Williams traces the themes of history, culture, and identity in Fuentes' work, particularly in his complex, major novel Terra Nostra. He opens with a biography of Fuentes that links his works to his intellectual life. The heart of the study is Williams' extensive reading of the novel Terra Nostra, in which Fuentes explores the presence of Spanish culture and history in Latin America. Williams concludes with a look at how Fuentes' other fiction relates to Terra Nostra, including Fuentes' own division of his work into fourteen cycles that he calls "La Edad del Tiempo," and with an interview in which Fuentes discusses his concept of this cyclical division.